In response to a host of challenges both new and old facing international staff, including the uncertainty around Brexit, rising visa and NHS fees, increased pressure from the Home Office, and the rise of racist and far right groups across the UK our UCU branch has created its first international working group. As a first action, we have created a short survey concerning the experience of international staff at Warwick.

We are conducting this survey in order to better understand the experiences of international staff at Warwick, including both EU and non-EU and comprising staff on all contract types. We want to identify common and shared issues that could be taken up by our local branch, as well as gauge the level of support for pursuing specific issues. Everyone, including home (UK) staff, can respond to this survey. If you are not an international member of staff, we still want to hear your views about issues affecting international staff!

The survey is available here: https://docs.google.com/forms/d/e/1FAIpQLScsVNx-QBbNqIawyTcHckxWo3tZRwjZfDytwgHQAbPpbTnaLQ/viewform?usp=send_form. 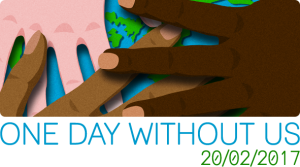 Warwick UCU  and the University of Warwick are supporting this national day of action to celebrate and highlight the contribution that people from across the world have made to the UK.

Whilst UCU cannot recommend withdrawal of labour, we encourage members to show their support by taking part in one of the local or national events.

The University is promoting the event at http://www2.warwick.ac.uk/insite/news/intnews2/one_day_without_us and we are encouraging people to meet in the Piazza at 12:30 for an opportunity to support this event on social media as the national organisers of the event have suggested.  As it is half term, you can even bring the kids and, after the event, take them on a sculpture tour to see the works by international artists, and visit the Mead Gallery to see the latest installation by Subodh Gupta.

Warwick academic Andrea G. Klaus has co-written a report on the value of the Erasmus programme –  “Why we cannot afford to lose Erasmus+”. This is an essential read for anyone who works with European students who have gained from this programme.

“The Erasmus+ (formerly the Erasmus) programme supports student and staff mobility throughout the European academic community. Amongst many other things it provides students with the opportunity to study in another EU country for up to a year for free. It also funds students who opt for a work placement in industry or who choose to work as Language Assistants in schools. Not only do students studying Modern Languages Degrees participate in this scheme but it is also available to students from all other degree courses. (For more information see http://www.eua.be/Libraries/publications-homepage-list/afterthe-brexit-referendum-possible-outcomes-for-horizon-2020-and-erasmus.pdf?sfvrsn=4 )
Since its launch in 1987 over 200,000 students have studied and worked abroad, mainly in France, Spain and Germany. This represents approximately 0.5% of the UK student population.”

Warwick UCU attended the march on parliament on the 9th July in support of our EU (and worldwide) colleagues. 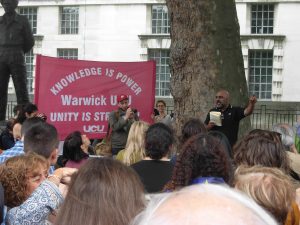 The event tagline was:
“Demo: one simple message: whatever country you are from, whatever community you are proud to be a part of, YOU ARE WELCOME HERE and we will continue our campaign to keep Britain open.”

A Warwick UCU member was interviewed by Sky News:

Warwick UCU will be holding an Open Meeting for staff, to which members and non-members are equally welcome. We will discuss initial reactions to the Referendum result and collate staff concerns to take to management. This is a worrying time for many and we are stronger if we stand together.

There will be a short introduction to the current situation following the EU Referendum outcome from Tom Flynn, an expert on EU and constitutional law, from the School of Law.

PS 1.28 is in Physical Sciences (opposite carpark 10 and close to the Gatehouse). 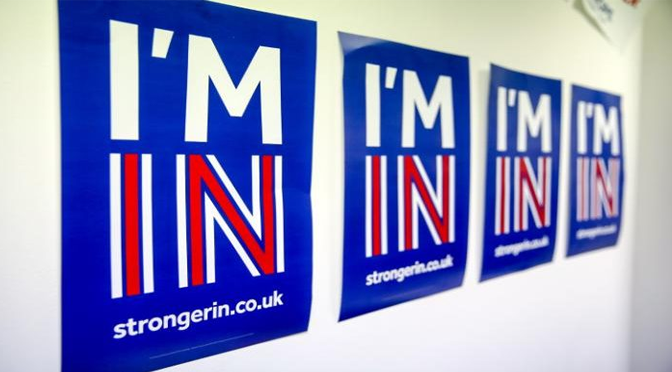 Members will have differing views on the result of last Thursday’s referendum on EU membership.

However what is not in doubt is that the UK now faces a period of considerable economic and political uncertainty. That uncertainty extends into the places where UCU members work in three main ways.

First, in practical concerns about the loss of funding for projects within or related to universities and colleges supported by the European Union.

Second, in the impact of the referendum result upon government policy. For example, there is now speculation that the apprenticeship levy from which many colleges hoped to benefit may be postponed or scrapped.

Third, in a sector with a highly international workforce which itself teaches a diverse student body, the impact upon staff and students themselves.

I have therefore this morning written to the UK secretary of state with responsibility for further and higher education and UCU will be making contact too with the devolved administrations seeking some clarity in these three areas on behalf of members.

The referendum campaign has produced a rising tide of racism and hostility to migrant communities, as well as a worrying trend of anti-intellectualism (‘who needs experts?’ and so on). In the face of this universities and colleges have a vital role to play in fighting racism and intolerance and in continuing to promote the benefits of education to both the individual and society as a whole. In short we must stand up for our staff and students and celebrate education for all rather than hide away until the storm passes.

UCU for its part will continue to pursue these values in line with a statement agreed by the National Executive Committee last Friday which you can read here.

You can read the full wording of the letter at:

“Throughout the 1980s and early 1990s the British trade union movement worked in solidarity with our European partners and fought hard to secure valuable working rights legislation at EU level. To this day these rights – including maternity and paternity rights, equal treatment for full-time, part-time and agency workers, and the right to paid leave – continue to underpin and protect working rights for British people.

If Britain leaves the EU, we are in no doubt these protections would be under great threat. Despite words to the contrary from figures like Iain Duncan Smith and Michael Gove, the Tories would negotiate our exit and, we believe, would negotiate away our rights. We simply do not trust this government if they are presented with an unrestricted, unchecked opportunity to attack our current working rights.”