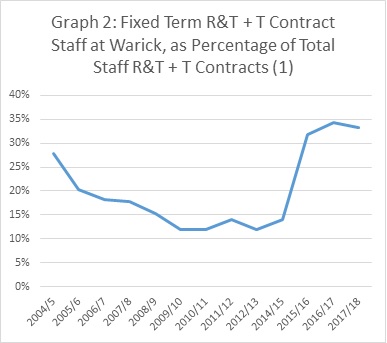 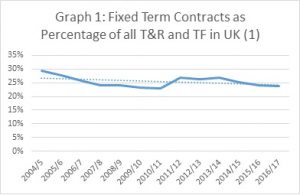 In 2002, UCEA agreed with the UCU that “fair and flexible employment arrangements should reflect … principles,” including the principle that  “indefinite contracts are the general form of employment relationship between employers and employees” (UCU 2002: 6).

Broadly across the UK, use of fixed term contracts in teaching and research (R&T) and teaching focused/teaching only (TF) jobs has declined, from 29% of staff performing these functions in 2004/5 to 24% in 2016/17 – the last year for which HEA data are currently available (Graph 1). (Analysis here intentionally excludes research focused/research only (RF) staff, whose fixed term contracts typically fall outside the direct responsibility of university management.) 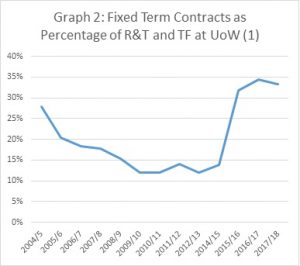 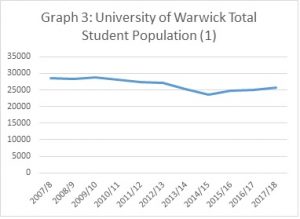 So while the sector as a whole has reduced its dependency on fixed term staff, the UoW appears to have used these staff to buffer changes to university funding, and to support growing student numbers (which had been on the decline since 2009/10, after the UK Parliament voted to increase the cap on fees to £9,000) (Graph 3).

Moreover, the reliance on fixed term contracts externalises the risk of taking on permanent staff, as these contracts hold open the opportunity for non-renewal and therefore free up capital for other purposes, thereby actively subsidising expansion of gross operating surplus – for which university management sets a target of 5% per annum (3). This surplus can then be prioritised for investment both in replacing and expanding infrastructure, and used to buffer future financial shocks.

Bottom line, without recourse to such high proportions of fixed term staff, the UoW would be entirely unable to  operate at anywhere near its current scale or level of academic quality and financial sustainability.

Administrators might argue that there are reasons to feel complacent about these developments. Such contracts do after all supply jobs to excellent colleagues who contribute in no small part to the overall output of university operations. Yet it’s clear that questions of collegial value take a back seat for senior decision-makers, as they ‘drive for efficiency’ (4) in pursuit of growth: “Warwick in 2030 will be larger than now, both in our student population and our research. That growth will be sustainable and will never compromise on quality” (5). By contrast, it seems little ‘accounting’ exists of the real cost to individuals working on fixed term and even more vulnerable STP contracts.

Indeed, in practical terms the ‘quality’ of experience here for these employees often brings them to tears (6). Anyone who has experienced working under fixed term conditions, or knows others who have, will be familiar with the omnipresent anxiety that intensifies as a contract nears its end. Concerns about paying the rent, repaying debts and supporting the family tend to blur into existential breakdown, growing self-doubt and an eroding sense of self-worth. Most staff will never report these worries to anyone other than their partners, often not even to work friends, given the widespread stigmatisation and discourses of those “unable to cope” – accentuated by a university culture of formal and informal completion for REF returns, promotion and general recognition. Those who suffer these experiences over repeated cycles find their personal lives coming under severe strain; in extreme cases, relationships may collapse and families must absorb the fallout.

Colleagues on permanent contracts, meanwhile, may be unaware or unconcerned that their departments have become honeycombed with precarity. They might even conclude that these legally temporary if ubquitous essentials of human resources are at least lucky enough to have some sort of job – even if they never manage to secure a pigeonhole, aren’t invited to staff meetings and don’t get a profile on the department webpages. There remains a widespread lack of awareness that without fixed term and STP staff, there would be many less permanent jobs to go around – the reality is, the security of some is subsidised by the insecurity foisted on others.

Line managers may make genuine efforts to support their staff, yet they face structural contradictions when attempting to do the decent thing. Even the best intentioned must deal with inflexible (irony noted!) university accounting cycles and resource allocation processes, while struggling to keep staffing at anything like sustainable and effective levels. They are often able to do no more than pay lip service to matters of work/life balance and mental health. Those with the right social capital may be able to free up resources by ‘talking to the Provost,’ but those without connections find themselves returning empty-handed from Academic Resourcing Committee (ARC) meetings, without the posts they need.

Warwick UCU believes that these conditions are unacceptable, full stop. But they are especially egregious in an HE sector that aspires to lead the world, and at a Russell Group university that claims to take the notion of ‘dignity at work’ seriously.

If you’re angry that casualisation has become business as usual in your workplace, we hope you’ll join our Four Fights campaign to end these conditions for vulnerable colleagues. We’re fighting to roll back the use of fixed term and vulnerable staff across UK HE; here on campus, it’s time to stop the subsidy extracted from the most vulnerable among us by Warwick University Ltd (7).

Wondering what steps to take? You can:

(1) Descriptive statistics generated by Warwick UCU, based on HESA 2020.

(2) Analysis by Warwick UCU, based on University of Warwick Financial Statements.

(6) Cf. the testimonies collected in the #unistory project, as well as personal accounts offered by brave colleagues as part of the UCU-WAC precarity protest day, 3 March 2020.

(7) E. P. Thompson (2013). If you can’t get a copy of this foundational text from the ‘company’ library (as the record suggests, current demand is too great for the supply), this “40 years on” reflection by former students is a worthwhile 20 min read.