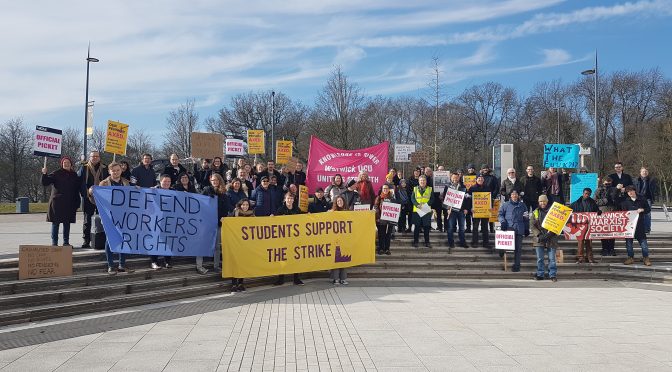 You may have heard that on Monday 12th March an ‘agreement’ was reached between UCU and UUK to end ongoing dispute over the USS pensions reforms and this was then rejected by thousands of university staff, including many here at Warwick.

These staff, having already taken strike action all over the UK during the last four weeks, voted in large numbers, and almost unanimously, to reject the offer and we imagine this is both confusing and raises many concerns and questions for students, and are writing to address them here.

There are many reasons that we rejected the UUK’s offer, but the bottom-line is that it didn’t address the reason we went on strike: to secure a long-term future for a defined benefits pension scheme. The offer amounted to a substantial reduction in our pensions income; it was predicated on inappropriate assumptions (which even Warwick’s own Vice Chancellor has criticised) that cuts are necessary to fix a ‘deficit’ in pension funds; and it was a three year deal, at the end of which we would likely be facing another round of attempted cuts.

It is for these and other reasons that UCU members all across the country rejected this ‘offer’ and pushed for a better outcome. As a result of this democratic action, the UCU rejected the offer at the national level in favour of continued strike action, possibly including 14 further days of strike action in Term 3, during which we will continue to go unpaid in a fight for what we believe is fair and in the best interests of UK Higher Education.

It is not with a light heart that we have taken the decision to say no to this offer leaving us with the prospect of continuing with strike action. We know that not only does this means a continued negative impact on the learning of our students but it also puts many of us at great financial risk and, in some cases, risk of deportation. But we also know how high the stakes of this struggle are. This is a national test case. If we capitulate, we don’t just lose our pensions, but possibly guaranteed pensions across the UK. And, more importantly, if we capitulate on our pensions, we are also capitulating to the financialised and privatised university of soaring tuition fees, casualised staff, and intensified marketisation; and, we are capitulating to the idea that workers are not entitled to economic security, or indeed to a life after work.

We are doing everything we can to ensure this dispute doesn’t go into term 3 and it is already working. UUK have called for a new round of negotiations and we believe if we keep the pressure up, this dispute can be resolved. Thank you for your continued support. We believe that if students join their voices to ours, we will be able to defend our pensions and end this dispute quickly, to everyone’s best interest, before Term 3 commences.