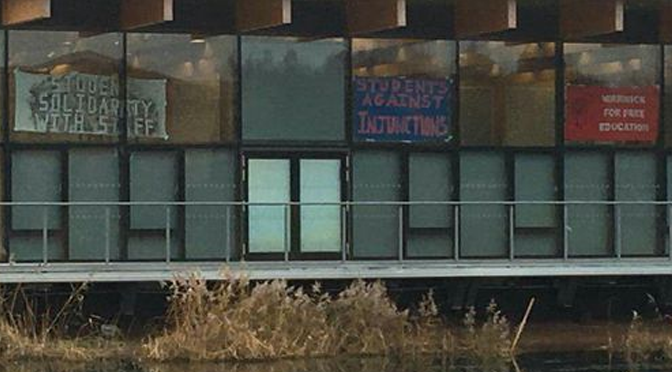 Warwick students have occupied The Slate, the conference facility being built between Scarman and Radcliffe, in protest at the “devastating direction in which education is being pushed and our own institution’s complicity in that agenda” – see https://warwick4freeducation.wordpress.com/2016/12/02/statement-of-occupation/#respond

The students’ arguments are compelling; Warwick UCU fully supports their objectives and completely endorses their demands (reproduced below):

Opposition to the Higher Education and Research Bill is widespread at Warwick, amongst both staff and students.

The occupation has already released a statement indicating that this is a direct act of solidarity with staff to fight the erosion to our working conditions that the TEF will entail.

We therefore call on University management to promise no legal action under the injunction and reiterate our request that it be lifted with immediate effect.

The Unviersity has posted a response from the VC on the Exec Blog:

“We have reached agreement to bring a peaceful conclusion to the student occupation that has been taking place at the University of Warwick since 2 December 2016. Here is my letter to the protesters following engagement between the University, the Students’ Union and the protestors to reach this conclusion.”

The tone of this letter, and its content, is very heartening.  We hope that this spirit of teamwork and collegiality can continue so that all members of the University can work togther to protect our institution from damaging change.