Today was another excellent day on the picket line! Fortunately, the weather gods smiled on us, and we finally got some sun and blue sky.

We were delighted to have the company of Aisghair, a beautiful, and very enthusiastic, dog. 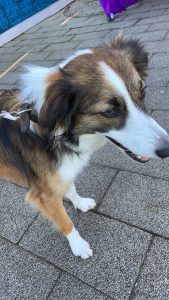 First, we congregated at the bus interchange, picked up materials (and, crucially, donuts) and dispersed to picket at various campus entrances. 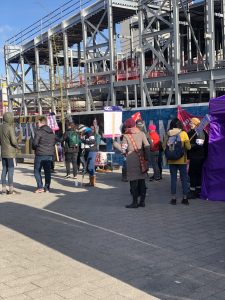 We returned to the interchange a couple of hours later, for a session of laughter yoga led by Nese Ceren. This involved imagining ourselves in a number of different scenarios, such as having a funny conversation on the phone; being in an argument; and dragging a heavy bag while attempting to catch a train.

We spent plenty of time laughing at each other, as well as at ourselves: a refreshing change from a regular day at a university! 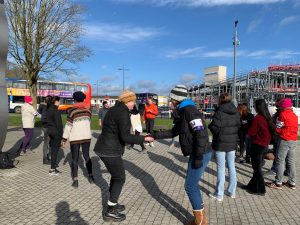 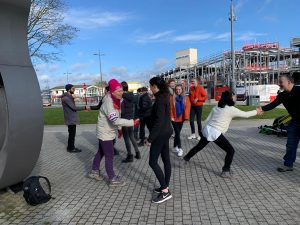 After a bit more chanting (“They say casualise / We say organise!”), we closed the picket for the day. 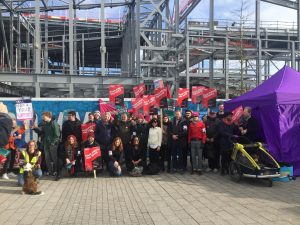 Later we went to The Graduate for a timely teach out titled “Anti-Chinese racism at Warwick: contagious even when apparently asymptomatic?” This gave us the opportunity to have an important conversation about Sinophobia, and the ways in which it is intertwined with current anxieties to do with the coronavirus.

Looking forward to seeing you again tomorrow. It looks set to be a busy, but fun, day. We’re meeting at the bus loop at 10am, and picketing in various locations. There are two teach outs: one called “Patients not passports”, on the policing of the NHS, led by historians Laura Schwartz and Roberta Bivins; the second, “Let’s get multilingual!”, is led by Carolin Debray and Richard Smith from Applied Linguistics. Finally, there’s the International Solidarity March, which starts at 1.30 on the piazza.